This film by Marco Brambilla, and another, newer one called “Evolution,” are on view IN 3-D at WALL SIZE (8 FEET BY 16 FEET) at the Santa Monica Museum of Art in Bergamot Station thru this Friday, August 20.

I have never had my mind blown so instantaneously and completely as when I entered the room in SMMOA with my friend Kristine McKenna where these two films were simultaneously screening IN 3-D at WALL SIZE (8 FEET BY 16 FEET). These are more than films: they’re giant, beautiful, moving Joseph Cornell/Pieter Bruegel/Hieronymus Bosch collage scrolls made out of dreamstuff, Hollywood films and the deepest, most involved LSD visions you’ve ever had. Layers upon layers, depths upon depths. Utterly transcendent. It is nothing less than the birth/realization of a new artform.

Seriously, this is one of those very rare times when it’s fair to say you really haven’t ever seen anything like this before. It must be seen in person.

(I do not care if you’ve seen dude’s video for Kanye, or if you saw “Civilization” on a monitor in an elevator in the Standard in New York, or on a big screen on a beach. This is superior. And anyway, you haven’t seen “Evolution,” yet.)

ADDENDUM: Here’s a still from “Evolution”… 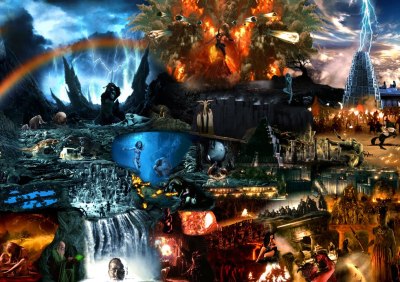